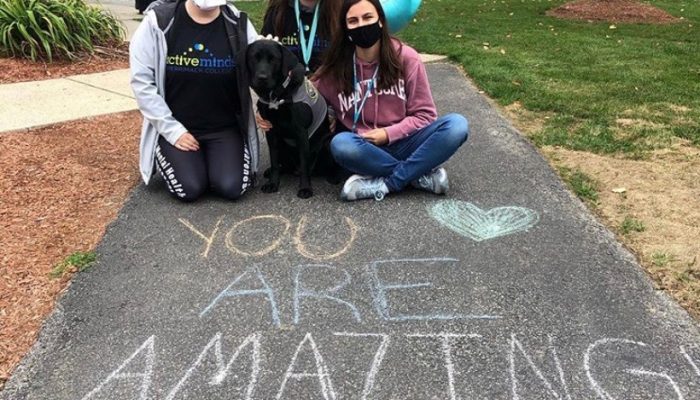 From October 19 through October 24, Active Minds hosted their national spirit week with a mix of in-person and virtual events. All students had the opportunity to partake, whether remote or on campus. Each day of the week had a specific purpose, including community, awareness, education, and advocacy. Two days were devoted to the Augustinian value of community, which is something the college as a whole fosters. Below is a breakdown of each day with its corresponding event and goal.

On Monday, students had the opportunity to visit the Active Minds table outside of the Sakowich Campus Center from 12:00 to 4:00pm. The club gained new members during this event, as well as in the following hours of the event. This event not only presented the premise of Active Minds as a safe space for students, but also promoted awareness about mental health as an issue that many students deal with. A sense of unity was created through this event and gathered positive attention throughout the campus community.

Tuesday was when all members of the community could gain insight into proper mental health terminology, be more supportive to those around them combating mental health, and build a further understanding on the implications one’s speech and behaviors will have on others. For example, words like psycho, crazy, and mentally ill, despite the seriousness of the context, stigmatizes those who do actually suffer and pegs individuals as abnormal for having mental health issues, which is not okay under any circumstance. Similar types of suggestions were provided in the social media post to aim at eliminating improper language that further invalidates mental health concerns.

Active Minds brought back a campaign from the spring semester that gained traction on social media from all members of the school, as the quick action of switching to remote learning was taken on by Merrimack as well as enforced by Massachusetts at a state level. Support ranged from students and families to recognition from administration, with a feature on the school website boasting the creativity and work the club put in for this unique yet impactful event. This campaign was conducted virtually this semester as well, yet rather than a post alone encouraged members of the community to partake and submit their creation to Active Minds. In the center of a white piece of paper, members of the Merrimack community were asked to put #HereForYou, and surround this central message with uplifting quotes along with mental health resources on and off campus. Students had from Wednesday to Monday to put in their submissions to be featured on the Active Minds instagram.

Students were able to visit the club in the 47 lounge Thursday evening to paint wooden picture frames to place a photo with one of their friends or loved ones. Meeting new people and painting for the night? Sounds like a no brainer.

In an effort to build awareness about body image issues, Active Minds had an exhibit outside of the Sakowich Campus Center where students could “stick it to the stigma” with a sticky note where they could write something they love about their body. Body image is an issue many college students experience in their high school or college years, and the club wanted to bring awareness to this issue in a welcoming way. Students could also take a miniature mirror with them and write something on it as a little reminder to keep with them when they are feeling down about their body.

Although different than past years, Active Minds still held it’s annual event, their suicide prevention walk. Typically, the opening and closing ceremonies would be held in Cascia and everyone, including non-campus members, would walk as a group the route that was mapped around the campus by the club. This year, these ceremonies were held via Zoom, and rather than gathering together at the same time, students could walk at their own pace between 12:00 and 3:00pm. Bags could be picked in front of Cascia, with registration paid via the Merrimack Active Minds fundraising page, with the price including the walk itself and the bags, which included Active Minds masks! The event was such a hit that even Merri was in attendance, and can woof your ear off about how great it was.