Home > Sports > Merrimack Athletics > A College Career He Never Expected: From Day One to D1 Basketball

A College Career He Never Expected: From Day One to D1 Basketball 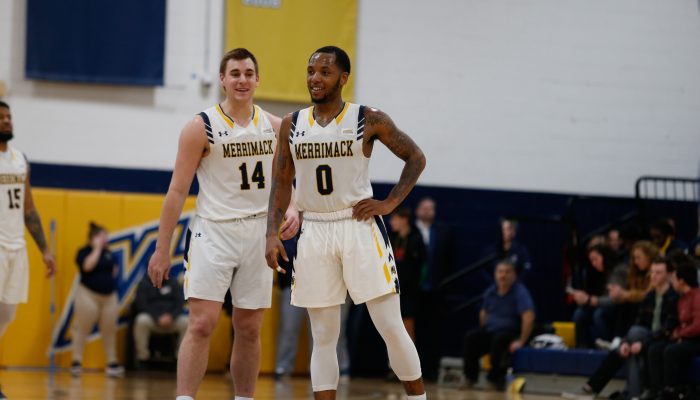 Devin Jensen, Merrimack College Men’s Basketball player, took his first DI season by storm. As an elite sharp shooter for the team, this  6′ 5″ and 225 pound Business major from Brielle, NJ, has just begun his time in the spotlight. Jensen’s journey through the NEC brought him a starting position on the court with an average of 7.2 points per game, accompanied by some unanticipated time on the big screen.

Jensen started his basketball career with Merrimack College in the year 2017 as a Division II athlete.

“It was a struggle to play (because) there were more experienced players,” Jensen said. Like any first year athlete, Jensen needed to make a name for himself. With the hunger to succeed he has turned his struggle into success.

Most athletes experience a career in one division; however Jensen, among some other Merrimack athletes, is lucky to experience two divisions.

Two years later, Jensen is now a junior with a lot more experience under his belt.

“I worked my way to a starting spot and play almost the whole game. We play way better competition,” Jensen said.

Teammate Justin Connolly believes that a defining moment in Jensen’s season thus far was his performance in their first DI win against Northwestern. It broke headlines as it was considered a major shock across the college basketball world.

“He knew he had to step up and fill some big shoes…Devin filled those shoes with no problem,” Connolly stated.

This team is really making a name for themselves in the NEC division.

“One of the team’s core values is W.E., which means win everything,” Assistant Coach Micky Burtnyk said. And they seem to be doing just that.