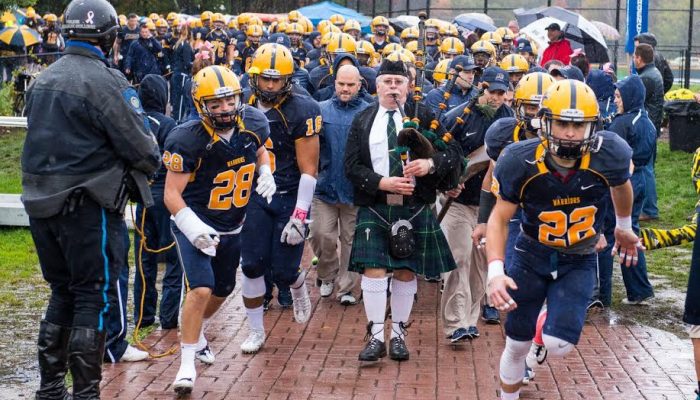 Five members of the football team are suspended from the program following an on-field brawl during the Oct. 22 homecoming game with members of opposing team Southern Connecticut University.

The fight happened at the end of the game, while the two teams were shaking hands and in front of thousands of students, families and alums on hand for the homecoming game. A video of the fight then went viral, garnering nearly 600,000 views online.

It is still unclear who started the fight. The video of the altercation clearly shows numerous members of both teams engaging in unsportsmanlike conduct, including one Merrimack player delivering a headshot to a member of SCSU’s squad who was on the ground. It took coaches, referees, and the help of police to end the scene.

“The post game incident following last Saturday’s Homecoming Game was an extremely disappointing moment for Merrimack Football. The actions of a few individuals certainly does not represent the values of the college, the Athletic Department, or the football program,” Curran wrote. “Regardless of SCSU’s track record of being involved in these types of incidents or whether their players and coaching staff instigated the altercation is irrelevant. The five members of the football team that were involved in the altercation need to make better choices and understand that responding and engaging in the manner that they did is completely unacceptable.”

According to Curran, those five members of the Merrimack College Football team are being held responsible for their actions and are currently suspended from the program. He hopes these consequences will serve as a learning experience.

“The coaching staff will now shift their focus back to supporting the 90 other student athletes in our program that are doing things the right way and continue to be leaders on campus and in the community,” Curran wrote.

With reports of over 3,000 people in attendance to this year’s homecoming game, such a number does not compare to the additional 578,232 viewers who watched the fight on the Instagram account of Barstool Sports. In a world heavily reliant on social media, it is no surprise the brawl that was caught on film went viral. In addition to the views, the post saw 2,699 comments and over 4k likes on Twitter. The story and video were also covered by FOX25 and 7News.

When asked how the action seen post-game at Homecoming reflects on the Merrimack College community, students responded similarly to Coach Curran.

“From what I heard, it was the other team’s fault but Merrimack responded. I don’t know what was said but it must have been bad. But, you have to remember the name on the front of your jersey,” said Senior Matt Delaney.

Senior student CJ Reusch also responded to the fight stating, “I understand sports, there’s always trash talking, but anyone who wears a Merrimack logo or uniform represents the school.”

The president’s office had no comment on the incident and deferred to a statement made by Northeast-10 Conference officials.

“The Conference hereby issues a public reprimand to the football programs at both institutions. The Northeast-10 expects our student-athletes and coaches to be mindful of their behavior and conduct at all times. We will be vigilant to ensure that is not compromised,” the statement said.