Home > News > Entertainment > What Should You Watch On Netflix?

What Should You Watch On Netflix?

What Should You Watch Next on Netflix?

“Harry, I’m going to let you in on a little secret. Every day, once a day, give yourself a present. Don’t plan it. Don’t wait for it. Just let it happen. It could be a new shirt at the men’s store, a catnap in your office chair, or two cups of good, hot black coffee.”—Dale Cooper 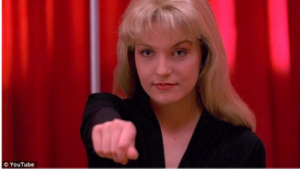 Photo Courtesy of The New Yorker

On the evening of April 8th, 1990, “Twin Peaks” premiered on ABC. The brainchild of David Lynch and Mark Frost, the show catapulted to the height of fame faster then you could order a damn fine cup of coffee and a slice of cherry pie from the Double R Diner. Kyle MacLachlan stars as the eccentric F.B.I. Special Agent, Dale Cooper. He arrives in the small town of Twin Peaks to investigate the murder of homecoming queen Laura Palmer, who was found dead, wrapped in plastic, and washed up on the beach. Laura’s death is the first indication that everything is not as it seems in Twin Peaks— everyone has something to hide.

Agent Cooper teams up with the local police department to solve the mystery, while Laura’s friends attempt an investigation of their own. Clues often come for the most unexpected of places and lead both teams to an agoraphobic botanist, a casino just outside of Canada, and a broken down, deserted train car. Agent Cooper himself, after having several odd dreams of a room with a chevron floor and red curtains, becomes caught between two worlds as the evidence begins to point to the terrifying and supernatural.

This small and charming town boasts a cast of quirky characters, including the deputies and the sheriff, Harry Truman, Norma Jennings (who owns the diner and whose husband is in jail for manslaughter), Nadine Hurley (hell-bent on patenting her silent drape runners), and the Log Lady, who is never seen without her log and often translates for it. As they come to grips with the answer to the question on the forefront of everyone’s mind—“Who killed Laura Palmer?”— all of the town’s inhabitants grapple with the revelation that sometimes the dark and heinous things in the world can be found in their own seemingly idyllic town.

The second season of “Twin Peaks” has nearly tripled the amount of episodes as the first. About halfway through, the plot becomes murky. The show suffered from a loss of direction and a station that had been fighting the show’s creative team since it first aired. However, the show will be returning to Showtime in 2017— filming has already begun.

For fans of Pretty Little Liars who are interested in the supernatural, “Twin Peaks” will definitely appeal to you. A large portion of ABC Family’s hit series has definite Lynch-esque details (remember Tippi the bird? In Lynch’s version, his name is Waldo). If you’re like me and can only handle moderate doses of horror, gore, and things that go bump in the night, “Twin Peaks” is the perfect series to binge-watch as fall begins and Halloween creeps closer. Above all, one thing is absolutely certain—after watching “Twin Peaks,” you’ll never look at coffee, cherry pie, or chevron the same way ever again. 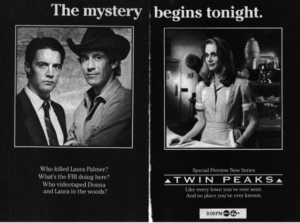 Fun Fact: Paul McCartney told this story to Angelo Badalamenti, the show’s composer: McCartney was asked to perform at the Queen of England’s birthday celebration at Buckingham Palace; however, before he could perform, the Queen apologized and said she had to leave the party. When Paul asked why, she replied, “Well, it’s five minutes of eight—I must go upstairs and watch Twin Peaks!”