Home > News > Woman flips off Trump’s motorcade and gets fired

Woman flips off Trump’s motorcade and gets fired 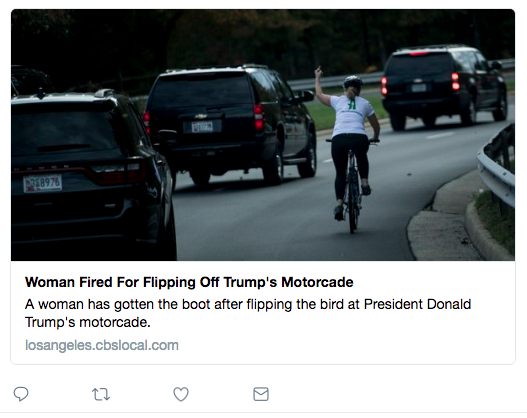 Juli Briskman, 50 year old mother of two from Virginia, was fired from her job at government contractor Akima LLC in Virginia for a photo of her flipping off President Trump’s motorcade went viral.

Have you ever regretted a photo in which you were tagged from the weekend? As of June 2017, Facebook has over 2 billion users, while Instagram has 700 million and Twitter has 328 million (TechCrunch, June 2017). When an embarrassing photo gets posted of you, it becomes public for the world to see. Briskman learned this the hard way.

Briskman was riding by on her bicycle when the motorcade passed her and her emotions got the best of her. Her gut reaction has now cost her job and caused her to go viral on social media and news outlets. A photographer traveling with Trump snapped the famous picture of Briskman while on their way back from golfing. The picture was then posted to social media and instantly went viral.

“He was passing by and my blood just started to boil,” says Briskman (USAToday, November 2017). She was angry with the fact that there are so many important things he should be taking care of, but instead he was playing golf.

She continues, “I’m thinking DACA recipients are getting kicked out. He pulled ads for open enrollment in Obamacare. Only one-third of Puerto Rico has power. I’m thinking, he’s at the damn golf course again,” (USAToday, November 2017).

With such a public forum, one post on social media can change your life altogether and Briskman learned that the hard way. She was furious and vented to social media without thinking of the consequences. The story went viral and took a rough turn for this woman — her life had completely changed within minutes. Not only did her post reach her social media followers, but it reached the 2 billion person pool on the other side of the glass screen. When her boss caught wind of the situation, he decided to fire her as he believed the incident could hurt business.

With the rise of technology and the growing dependency on smartphones, more and more social interactions occur behind a glass screen rather than face to face. Although convenient, you are now facing roughly 29% of the world’s population (assuming the world’s population today is 7 billion) when you look into your Facebook feed. If public, the photo posted of you may be viewed by 2 billion people that you have no connection to.

Even worse, if it sparks enough attention, you could be viewed by the world through news outlets reprinting your words. Social media is constantly debated as to whether it provides positive or negative interactions between people, however, it is undeniable that social media has completely changed the way we interact as humans around the world.

As students on the brink of starting our careers that will shape the rest of our lives, we need to be more aware of the 2 billion faces on the other side of our screens when we are tagged in a picture from last night’s crazy party in Royal.