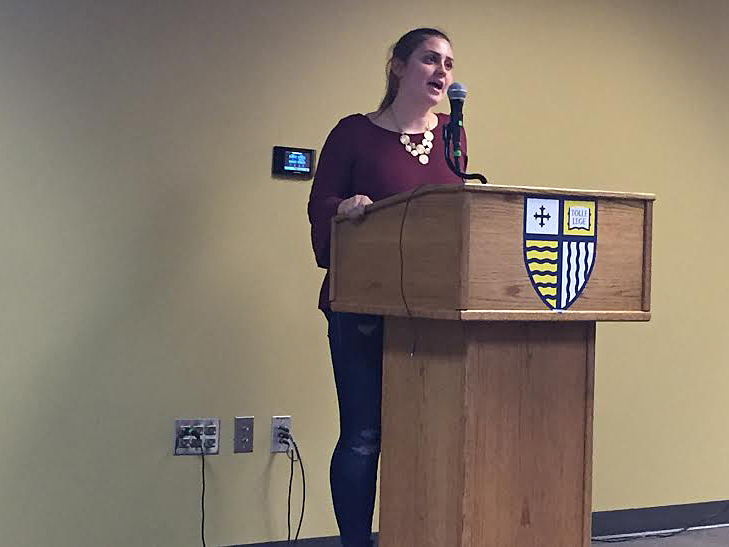 On Nov. 10, the Office of Community Outreach Hands to Help hosted its second annual Honoring Our Veterans ceremony. This event was started to honor those in the community who have served and sacrificed to protect our country.

The ceremony started with a welcoming introduction from student host Casey DiPanfilo, as well as an Air Force Veteran.

After the performance, DiPanfilo welcomed The Rev. Ray Dlugos to the podium for a speech. He expressed how important veterans are to the Merrimack community and reminded the audience that Merrimack College first opened in 1947 to serve as a place of education for veterans coming back from World War II.

Dlugos also discussed that his family is full of veterans, including his mother who served in the Navy as a commander nurse. After sharing his stories about the history of Merrimack and his family, student Christina Lannon read the poem “What Makes a Warrior.” DiPanfilo then welcomed the guest of honor at this event, retired Sgt. Major Gene Musgray.

Musgray entered the military in 1961 as a draftee. He was transferred overseas for four tours in Germany and two tours in Vietnam. While there, he was awarded two Silver Stars, two Purple Hearts, the Bronze Star with V Device, a Commendation with Device, a Combat Infantry Badge, and a Cross of Gallantry with a Silver Star from the Vietnamese Government.

Musgray also served three tours of duty in the U.S. Some of his assignments included infantry combat squad leader and platoonsergeant, Cho Hoe advisor to Vietnamese POW camp, military police work, drill sergeant, and finally, he was commandant of cadets at Boston University ROTC.  His brave actions and honorable experiences while serving our country did not go unnoticed.

The event concluded with a  performance of “God Bless America” by Ferrini and then a prayer from Dlugos to bless the food that was being served at the end of the event.

For those interested in learning more about networking with student veterans, DiPanfilo recently started a Veterans Club on campus, which is currently in an infancy stage and will hopefully be finalized in the upcoming weeks.