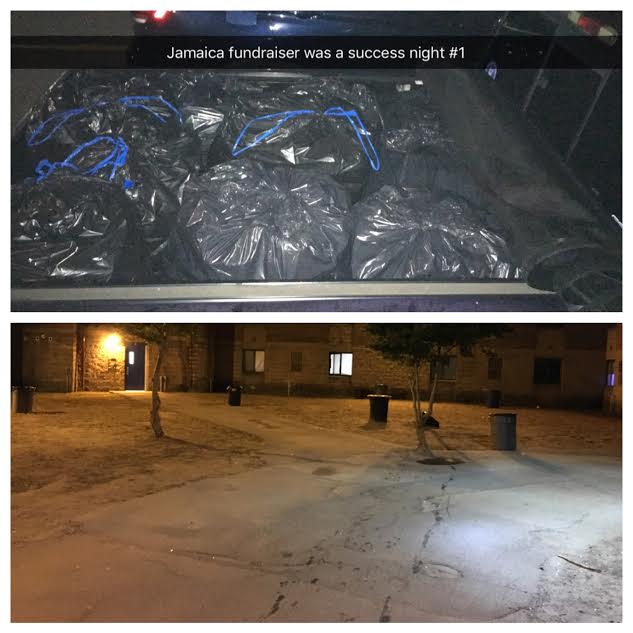 On Friday, Sept.16, many students spent their night celebrating the warmer weather in the St. Thomas and St. Ann Quad. The students of the Jamaica service trip instead stayed awake on clean-up duty. In an attempt at turning fun into a fundraiser, this service group put a positive spin on campus cleanliness and decided to collect the recyclables from Merrimack’s weekend endeavors and make it a bottle drive.

“The apartment quad had been left a mess for the first few weekends of the semester.  We decided that our fundraiser would not only raise money for our trip, but would provide a positive effect upon our community,” said Verreault.

The idea to get the student body involved came after the service team tried to pick up bottles and cans on their own as a previous evening progressed. To their pleasant surprise, as the night went on, students began to join in on their mission and that is when they thought, “Let’s make this thing big.”

From there, the team met with senior Class President Brenna McDonald decided to hang up flyers and spread the word of their cause.

The process began on Friday night when Verreault went around putting black trash bags in each of the trash barrels located around the quad. From then on, he made an active effort to walk around and change the bags while picking up cans when he could.

Although they ran into trouble with smashed bottles and uncooperative students, according to trip leaders, the service team collected nine bags of cans and bottles in just a few hours of the students’ outdoor activities.

With these bags, the team was able to cash in $36 dollars, a number they felt did not reflect their efforts. However, they were successful in addressing a much needed campus issue.

“The quad was spotless after our team was done and created a healthier environment for the seniors to live in, along with an enjoyable space for other students of the Merrimack community to enjoy,” Perreault said.

The team had planned to continue this initiative into Saturday night, but unfortunately the bottle intake was put on pause due to an early shut down of the outdoor scene.

Although the campus clean-up may not have proved as successful as the team had planned in terms of funding, the group has high hopes for their departing journey on Jan. 7.

Joining Liza and Christian are eight other student volunteers along with two staff member advisors.

When the team heads to the Caribbean this winter they will be serving the special needs children of Montebago Bay,  Jamaica.  There they will work with the “forgotten and neglected” children of the Montebago Bay community with severe mental and physical disabilities.

“A lot of the children and families will most likely not be able to travel outside of their home.  Our mission there is to bring the community and children together,” said Verreault.

“The purpose is to let the residents know what love and affection feels like; what it is to do something different and experience something new,” Liza stated.

The group will immerse themselves in the Jamaican lifestyle for a week and hope to return with a message to the rest of our community that there are other people out there with real world struggles.

“As a group we know we will not be going to Jamaica for a week to change the world there, but our hope is to touch someone’s heart and brighten their day,” Christian stated.