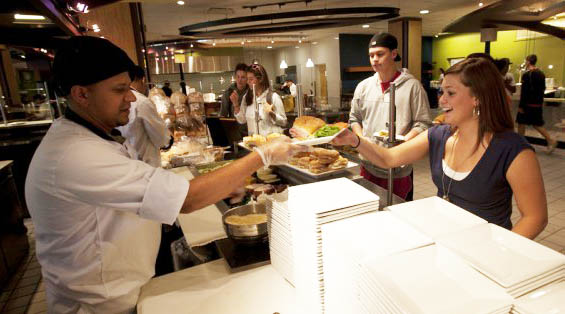 With long lines to grab a meal, there have recently been many student complaints surrounding the lack of space (seating included) in Sparky’s.

Senior Executive Chef Damian Zedower finds that everyone has a seat when at Sparky’s and doesn’t see the dining hall as being overcrowded. “During peak times, we get all staff members to help move things along. I’ll even come out from the kitchen to help where there are mass groups of people.”

Zedower manages all of the food options available on campus. He creates the menus and strives to make the food as fresh as possible. With this came changes in food station locations in Sparky’s.

Another change is the location of the omelet station. These changes were put in place to create a steady flow of traffic in Sparky’s throughout the day.

This year, class times were also scheduled in hopes that that the peak lunch and dinner times at Sparky’s would be less crowded. Sodexo employees have found that this year, Sparky’s hasn’t been as hectic at peak times as past years.

Although these changes were put into place, some students are still overwhelmed when arriving at Sparky’s. Junior Danielle Donovan stated, “There should be a second dining cafeteria that offers not only more seating, but additional options to the menu.”