Home > News > Dancing her way from Ghana to Merrimack

Dancing her way from Ghana to Merrimack 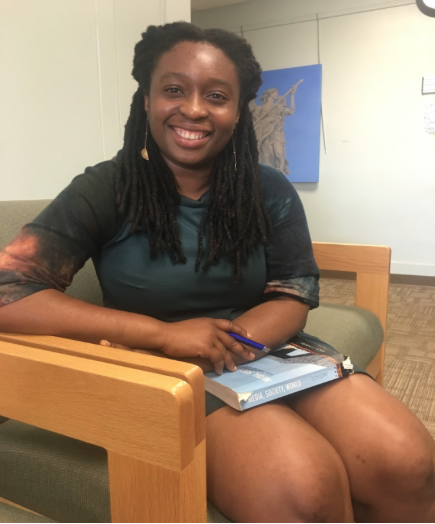 Wilheima Agbemakplido is probably the only professor on campus that speaks the language Ewe.

Agbemakplido is a native of Ghana and is Merrimack’s newest Communications and Media professor. She explains Ewe is her first language and it is considered “a tonal language.”

“A tonal language is a language in which a word’s meaning could be different depending on which syllable is stressed in a particular sentence,” says Agbemakplido. She says her language is all about the structure in which your mind thinks.

Agbemakplido came from Ghana when she was 14 years old because “my parents made me” and now resides in the Forest Hills section of Boston. As an undergrad, Agbemakplido went to UMass Amherst where she studied Political Science, Gender Studies, and International Relations. As a graduate student, she went to UMass Boston where she studied Meditation, Negotiation, and Conflict Resolution.

At Merrimack, she teaches a Conflict and Negotiation class. She has always been interested in conflict and how others communicate conflict. Her favorite part of teaching is getting to interact with students. She enjoys coming to class with new ideas and being able to share them with her students. “I like to bring excitement to the classroom,” Agbemakplido said.

When asked why Merrimack was a good fit for her, she said, “I could feel the great sense of community and when I first sat down with some of the staff, they were saying hi to everybody that passed by.”

When on the subject of differences in culture,  Agbemakplido talked about how many more food choices there are here in Boston than in Ghana.

“When I go to the grocery store and look at all the chips, I sit there and ask myself should I get bleu cheese or taco flavored chips?” she said laughing.

When asked what activities she enjoys doing she said all different types of dancing.

“I perform ballet, modern, west African dance, and I am in the process of learning classical Indian dance which requires dancing in temples,” she said.

She also enjoys cooking and painting. On the weekends, Agbemakplido does a blackout from technology where she does not allow herself to use any type of technology or media.

The most interesting idea of culture in Ghana is that colors like magenta, fuscia, and pink all fall under the category of the color red. When asked what the biggest difference is  between living in Ghana versus Boston she said the fast transportation and the difference in weather.

“It does not snow in Ghana so when it snowed in Boston for the first time I was like ‘what is all this white stuff all over the ground?’” she said laughing.