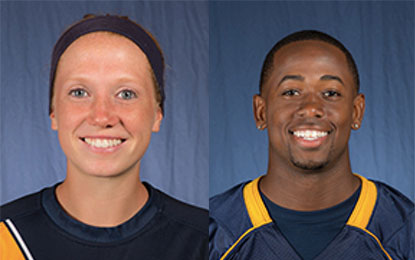 Last season was really tough on the team not making playoffs so going forward this season I know that making playoffs is something that we are going to be able to do and have the talent for. Hopefully we will go beyond that.

One of our senior forwards, Jenna Savi plays a very important role in our team setting up opportunities for us to score. I also think the freshmen class as a whole brings a really great dynamic to the team. Each one of them is full of energy, regardless how much time they get on the field; they give it 100% each time they play. It’s also fun to watch them out there!

There really isn’t one team in the NE-10 that we don’t take lightly. Every game feels like one of our biggest rivals so I think every game no matter what is going to be a blood bath. If we bring the intensity to every game I know we will overall have a successful season.

The goal every year I believe for a team is to win a championship! The goal set for this team is to improve where we did poor at last year and in the end win the conference!

Key to success this year will to be take each game week by week we have a very good conference and every time is good. The second key would be leave no doubt in order to reach our goals at the end of the season.

So far so good, the team has remained healthy which was our big problem last year but for the most part this team is the most talented we had since 2 years ago. As I said in previous interviews you can’t predict the future but we worked hard enough for it in order to have a successful one.