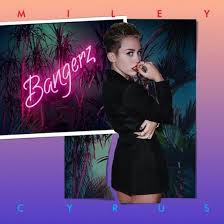 Teddy bears, wrecking balls and twerking have made Miley Cyrus consistently in the media in the last couple of months. From her performance at the 2013 MTV’s VMA’s to her newest music video “Wrecking Ball,” everyone has buzzing about the 20-year-old Nashville native. So when Miley’s new album came out earlier this month on October 4, the critics were ready to weigh in on her newest album, Bangerz and so were we.  Here’s what we found about Miley’s new album.

1. “Adore You”-A slow hip-hop ballad with minimal lyrics, Cyrus sings about her love (which is assumed it is Liam Hemsworth), singing, “I could do this for eternity you and me.” Unfortunately, Cyrus ended her engagement with Hemsworth this past September, and it’s believed that most of the romantic songs on Bangerz are about him. This track resembles Rhianna’s ballad “Stay.”

2. “We Can’t Stop”-The first single off Bangerz, this song proved to be a comeback song for Cyrus. With its catchy lyrics and dance-y beat, it was evident that it was one of the summer’s top pop hits of 2013. This song’s lyrics describe a real-life house party that Cyrus and her friends went to and “We Can’t Stop” was the result.

3. “SMS (Bangerz)” ft. Britney Spears (Explicit)-The title track on Cyrus’ album, this song shows that Cyrus is adopting a new hip hop sound. Performing the track with Britney Spears, this duo raps about “Bangerz.” We still haven’t figured out what “Bangerz” is about, but it makes a catchy tune on the album.

4. “4X4” ft. Nelly-This song in particular on her album has a county, pop, and hip hop feel with Nelly rapping on the track produced by artist Pharrell. In this song, Cyrus sings about being a “female rebel,” which becomes a recurring theme on Bangerz.

5. “My Darling” ft. The Future-A hip hop twist to “Stand by Me”, Cyrus performs this track with The Future. From the lyrics, “What happened to the feeling? / I wish it wouldn’t stop / we were about to be together” sends us signals that maybe Hemsworth and Cyrus’ relationship ended before the album released, or it could be about someone else.

6. “Wrecking Ball”-By now, you’ve either heard the power pop ballad or seen the video where Cyrus is sitting naked on a wrecking ball. We hear the emotion in her voice as she sings about how a lover ‘wrecked’ her and how she should have “let them in.” This song is easily one of the most popular on her album and one of our favorites.

7. “Love Money Party” ft. Big Sean-This song with Big Sean and Cyrus’ line “Love Money Party” reminds us of Jay-Z’s “$100 Bill” and Beyoncé featuring Andre 300’s “Back to Black” from The Great Gatsby Soundtrack. This song has an old school hip hop feel to it. We definitely think that this song could have fit into the “Gatsby” category with the subjects like “love money party” being Jay Gatsby’s theme.

8. “#GETITRIGHT”-Cyrus’ repetitive line, “but we gotta get it right, we can’t get it wrong” is the basis of this song. Singing about a potential significant other and how she wants to be with that person. Again, this song looking through a romantic lens can be referred back to Liam Hemsworth.

9. “Drive”-This song is reminiscent of her older music, the more pop-y, electric sound that she’s had for her past albums. Like the other songs on this album, this is also a romantic song, talking about how an ending of a relationship and how she feels cheated and lied to, singing the lyrics, “But all the broken promises I won’t miss I’m finished/All I know are the facts/That when I look you in the eyes/ All I see are the lies.” This song has a deeper meaning than the other songs on the album, like “We Can’t Stop” and “4X4.”

10. “FU” ft. French Montana-This song’s title is kind of um…self explanatory. Cyrus sings about how she was blind to the fact that she was being mistreated by someone, including the lyrics, “then I accidentally saw few things in your cell / I even LOL’ed/ Man I should’ve known.” The song starts off with a fast beat and then slows down, making it an interesting combo of songs, including a rap by French Montana.

11. “Do My Thang” (Explicit)-This song reminds us of a Nicki Minaj song. Minaj’s songs are filled with fast rap lyrics, catchy beats and repetitive one liners. Cyrus’ repetitive lines in this song happen to be “Imma do my thang” and “I’m a southern belle, crazier than hell.” One of our favorites on the album, it’s definitely worth listening to twice.

12. “Maybe You’re Right”-Another romantic song on the album, this relates to “FU”, talking about how a chapter in her life has closed: “You might think I’m crazy/ that I’m lost and foolish leaving you behind/ Maybe you’re right.” Other than the theme being partying, the theme of this album tends to be more romantic than partying.

13. “Someone Else”-Like the title suggests, the overall message of this song is about becoming a different person after a hard breakup and ‘loosing your heart.’ Cyrus states: “I’m hurting myself/ I’ve turned into someone else.” This song is the final song to Bangerz. It’s definitely a different way to end an album, while most artists end on a positive note rather than a glum one.

Since this was Cyrus’ first album since 2010, she considered Bangerz to be her first album, although she has had multiple albums in the past. We loved Miley’s Can’t Be Tamed album, and this album is vastly different from Bangerz. However, this album does have some dance-y songs that we love, including some ballads like “Wrecking Ball.” Miley recalled this album being “Miley 2.0,” and we definitely agree. Her new ‘southern hip hop’ sound is different than her dance-y pop songs she’s had in the past. We admit—this album’s growin’ on us Milers, nice work.